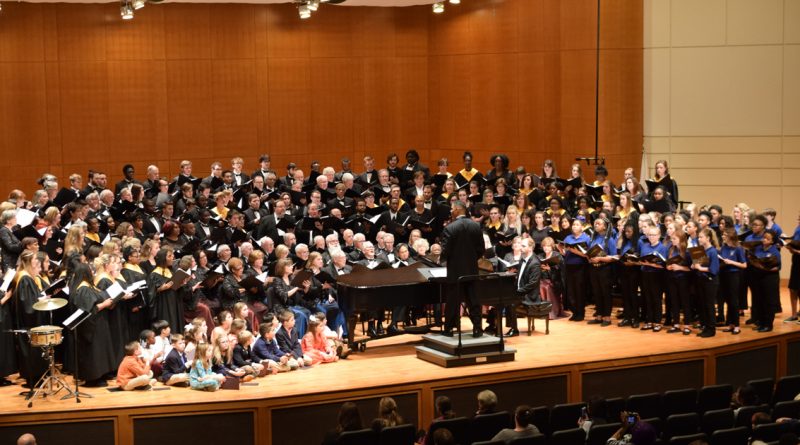 On the afternoon of March 9, 2019, the LaGrange College Callaway Auditorium was truly filled with “the sound of music” as two hundred and sixty-five singers, instrumentalists with an attending audience of over five hundred gathered together for the fourth annual West Georgia Choral Arts Festival. Singers from ages eight to eighty were featured in some of the area’s most outstanding choirs. Collaboratively, the sheer force of their singing was breathtaking in both scope, size, sound and spectrum.

The first half of the concert featured each choir performing two selections of their director’s choice. LaGrange College Singers under the direction of Debbie Ogle, opened the festival with an energetic and highly polished performance of John Rutter’s Clap Your Hands followed by Moses Hogan’s arrangement of Joshua Fit the Battle of Jericho. As the co-partner in this event, the LaGrange College choral singers set a high standard for the choirs that followed and assured the audience of a splendid afternoon of great choral music!

Outstanding youth, high school, collegiate and adult choirs sang with polished sophistication, exceptional musicianship, remarkable maturity, and stunning stage presence. The audience was mesmerized and thoroughly entranced as one spectacular performance following yet another. The excitement was palatable throughout the entire hall as each choir shared refined performances offering a wide and interesting variety in both choral literature and styles:

The second half of the concert featured the collaborative 2019 Festival Choir which joined all two hundred sixty five singers together on stage under the direction of LaGrange native and guest director Dr. Oliver N. Greene, Jr., Andrew Harry was festival accompanist for this event.

John Leavitt’s celebratory Festival Sanctus, energized and overwhelmed the hall with the sheer power of the sound of these voices joined together in wondrous choral harmony under Dr. Greene’s expert, sensitive and yet robust direction. It was truly an “out of body” experience! The addition of a superb LaGrange College percussion ensemble added a sparkling vibrant quality to this well known and exciting composition.

Dr. Greene followed the opening number with Dr. Roland Carter’s arrangement of Ride On Jesus which infused depth, contrast and a unique a cappella approach to this less known but none-the-less fascinating old African American spiritual.

As noted, all two hundred sixty five singers were on stage during this portion of the concert. The youth and middle school choirs participated beautifully but their tender and lovely introduction in Mack Wilberg’s arrangement of He’s Got the Whole World in His Hands was stunningly simple yet so profound causing a hush to envelope the entire hall at that moment when they began to sing those old familiar words and tune. This was an ideal and most fitting closing number for a perfectly wonderful afternoon of music making together.  It brought to fruition in both word and music, the power of many voices joined in harmony, for just that one moment in time,  together as one voice, without regard to race, creed, age, religion or beliefs…….it was a joyous musical community event and a great tribute and triumph for all those involved……since the inaugural concert four years ago, this The West Georgia Choral Arts Festival  continues to grow, prosper, and offer singers and supporters an opportunity to celebrate the value, heart, soul and transformative power of choral music….of singing together….of being in true harmony with one another.

“Choral music is not one of life’s frills. It’s something that goes to the very heart of our humanity, our sense of community, and our souls. You express, when you sing, your soul in song. And when you get together with a group of other singers, it becomes more than the sum of the parts.