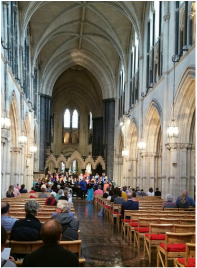 LaGRANGE — Some members of the Choral Society of West Georgia are smiling but weary after a weeklong, collaborative concert series through The Emerald Isle known as Ireland.

Eight local singers boarded a flight during the week of July 3 to meet with three youth choirs from Australia and Princeton, New Jersey, in Belfast.

The vocalists, having never met each other, quickly learned 10 new songs, new languages and how to harmonize with each other in order to perform concerts inside Saint Patrick’s Cathedral Catholic Church in Belfast and Christ Church Cathedral in Dublin.

The trip was organized by Bettie Biggs, artistic director of the Choral Society of West Georgia. She booked the trip through KI Concerts, a company that stages performances all over the world. They offer trips with opportunities for musical groups to perform with a professional conductor. More than likely, an artistic organization will be paired alongside other groups from different parts of the country — and world.

The director of the Ireland trip was Dr. Janet Galvan, of Ithica, New York. Biggs studied with Galvan during a residency in Minnesota a few years ago and was eager to work with her again.

“Dr. Galvan developed a program called Bridges,” explained Biggs. “Music was the bridge. We performed Australian pieces, sang in Italian, Swahili, Spanish and Latin. We sang gospel music. We did a very eclectic program with various languages and various styles of music.

“The concert was nothing short of spectacular,” she added. “As diverse as our age range was, the students in the younger choirs were very well trained and performed just beautifully.”

Brenda Mitchell, who joined the Choral Society of West Georgia in January, added: “When you have that many voices singing together in harmony, you can’t even put it into words,” she said. “… There’s nothing better when you sing from your heart and soul. It just gives you chills.

“It was great to be challenged, but it was also like being a little kid again,” she added. “I remember thinking, ‘Wow, I’m learning so many different things.’”

Those lessons were taught in some of the most historic churches in the world — some almost as old as the country itself. Christ Church in Dublin dates back to 1030 A.D. and was where George Frideric Handel debuted his famous piece “Messiah” in 1741.

“The churches we sang in were beautiful,” said choral member Alice Christenson. “… When you’re singing, you think about who walked here before you, who was baptized here … it was just amazing.”

“I found it to be very spiritual, almost like an out-of-body experience,” said Biggs.

A spiritual experience that was felt even in the tumultuous city of Belfast.

The city is still divided by religious views and — literally — by a wall, Biggs explained. People of the Protestant faith live on one side; while folks who follow Catholicism reside on the other side.

“It was relevant that we got to sing at the Saint Patrick’s Cathedral in Belfast,” said Biggs. “To sing in that church where Catholics and Protestants came together to hear us sing … it was very profound.”

This will not be the last opportunity for the Choral Society of West Georgia to perform out of state. The group was invited to sing at Carnegie Hall in New York City in March 2017.

Biggs said she would like to plan another overseas concert tour for next summer with more members of the group. Another trip to the enchanting Emerald Isle is not out of the question either.

“Ireland is so special,” she said. “It’s unlike any place I’ve ever been to … it was mystical.”