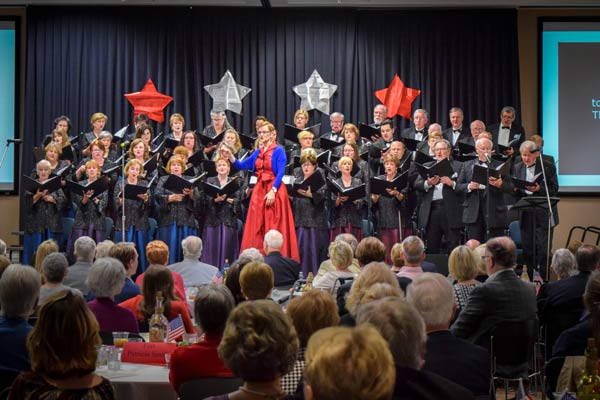 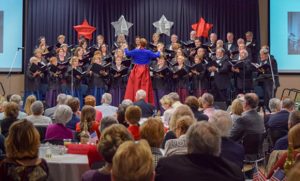 The evening was complete with an All-American Victory dinner and drinks by Kimbles, the Big Band sounds of the Auburn Knights Orchestra, Carol Cain as Rosie the Riveter, and the great popular songs of the 1940’s performed by the Choral Society of West Georgia.  All area World War II Veterans and spouses were invited to be Guests of Honor at no charge.

Held at the Callaway Conference Center in LaGrange, Georgia, the evening began with much conversation about the memorabilia and historic newspapers from the WWII era that were displayed in the vestibule. Upon entering the ballroom, tables were designated with names of forts and decorated with period items.  Each setting had a program which gave a glimpse into the full night of entertainment to come.  Drinks and dinner were quickly served while lively conversation continued.  Six projectors smoothly faded between photos from that time. Everywhere you looked, the mood was enhanced with patriotic decorations.

The Choral Society of West Georgia filled the stage, the Auburn Knights Orchestra took their places and the show began.  Song after song interspersed with appearances by Rosie the Riveter kept the audience’s attention with both listening and dancing.  There was a great deal of audience participation as a large dance area was filled on numerous occasions and everyone was asked to sing along with several songs.

World War II Veterans in attendance were individually announced and asked to stand while the audience enthusiastically gave their heartfelt appreciation.  This was a great highlight and everyone felt honored to be in the presence of so many WWII Veterans from different branches of the armed forces.

A superbly successful evening with many, many comments by guests stating that they had a truly enjoyable and full evening of entertainment, dancing and dinner.  Over 300 guests in attendance and eleven World War II Veterans honored.

Here are a few photos from the evening: