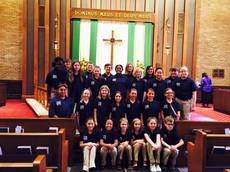 LaGRANGE — The powerful sounds of vocal music will take center stage and reign over the campus of LaGrange College during the inaugural 2016 West Georgia Choral Arts Festival.

Eight different choral societies — more than 300 people — will perform musical pieces for their peers and harmonize together under one roof in a special concert for the public. The event is hosted by the Choral Society of West Georgia and is honoring the organization’s 10th anniversary in LaGrange.

The festival rehearsals will be the morning of Feb. 27 in LaGrange College’s new music school — the former West Side Magnet School on Forrest Avenue — culminating with a formal choral concert that afternoon inside Callaway Auditorium.

The concert is free and open to the public.

“The community will see what a wealth of talent we have here and how fortunate we are in this community to not only have this talent, but the personnel and facilities to host such an exciting event,” stated Bettie Biggs, artistic director of the Choral Society of West Georgia.

Biggs said the eight choirs come from the southwestern part of the state and are made up of singers from all walks of life. Vocalists range in age from 8 to 80 from the Choral Society of West Georgia, the Sons of LaFayette, LaGrange College Choir, Point University Choir, choral ensembles from Troup County, Callaway and LaGrange high schools plus the Voices of the Valley Children’s Choir from Columbus Preparatory School in Columbus.

The festival has been in the planning stages for more than a year, Biggs said. Everything in the day-long event is totally paid for, including all the music, folders, food, accompanists and more. Biggs said the Choral Society of West Georgia received funding for the festival through two grants; one from the West Point fund and one from the Charter Foundation.

According to Biggs, this is the first volunteer choral festival of its kind in West Georgia.

“The event will give singers a chance to join with people with the same interests under one roof,” Biggs explained. “We have a lot of different groups doing a lot of different events at different times. We need to continue to come together, and this festival will help us do that. It also keeps the choral arts at the forefront of the community’s mind.”

Biggs said Beth Everett, associate professor of music and director of choral ensembles at LaGrange College, will be the guest conductor for the festival.

She said the event will be a unique experience for not only those involved, but those who take in the melodies and harmonies of the voices on stage. The festival could also potentially positively impact choirs in the area for years to come.

“Once a week, people get away from their jobs and chores for at least an hour or two and make music together. There’s something almost mystical about it,” Biggs explained. “Now to be able to share that and bring that to the community will bring an extraordinary experience for everyone.

“Singing is the one art form that all you have to have is the desire to sing. You are the instrument,” she continued. “I really believe the choral art has the power to be transformative. I’ve seen it. You are using words and music together to create this exceptional art form.”

While the festival was created as a way to honor the Choral Society of West Georgia’s 10th anniversary, Biggs said she hopes to make the event an annual tradition.

The 2016 West Georgia Choral Arts Festival is set for Feb. 27. The concert will be 4 in the afternoon at Callaway Auditorium. It is free and open to the public.

The 2016 West Georgia Choral Arts Festival is set for 4 p.m. Feb. 27 at Callaway Auditorium. It is free and open to the public.